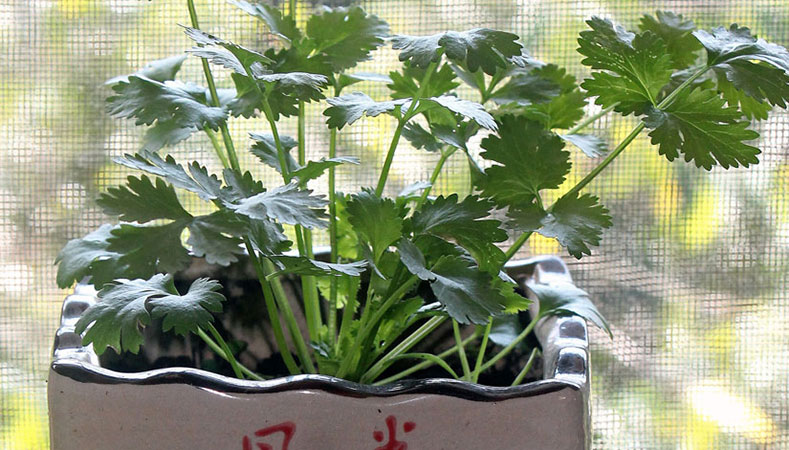 Kung hee fat choy! February 16 marks the start of the Chinese New Year or Lunar New Year. It never fails; every year I resolve to incorporate healthier foods into my diet. This January was no different. However, Chinese New Year has inspired me to experiment with tasty Chinese cuisine and adding Chinese herbs to my organic home garden. Maybe if I just give up on bland vegetables and prepare the unique and delicious vegetables and lean meats featured in Chinese dishes, I will have a better chance at success.

Join me in celebrating the Year of the Dog and begin preparing and enjoying flavorful Chinese food. Two main herbs featured in traditional Chinese fare are Chinese parsley (also known as cilantro) and Chinese chives (also known as garlic chives). Sources report that Chinese parsley has been around since 5,000 BC – it’s primary function was medicinal. It’s inclusion in Chinese cuisine dates back hundreds of years and would make an excellent addition to your home garden.

With demand for Chinese parsley being so high, it makes sense to include it in your home garden. Unlike some other herbs, it is easy to find and not extremely expensive. But there’s no need to stop everything and rush to the market to pick some up when you can simply cut some leaves and stems as needed. This allows you only to use what you need – no waste. Plus even if it isn’t vital to the recipe it makes a lovely garnish.

Chinese parsley prefers warm climates so, once again, we are lucky to live in Hawaii. It will be grow all year in a home garden. Chinese parsley requires full sun. And keep the soil moist to the touch. Be sure to check the soil often during the dry season.

You can grow Chinese parsley from seeds, but I prefer using starters for an organic home garden and they can be found in local nurseries and home improvement stores. They are popular and can be picked up for less than $2.00 each. The starters can be included in your backyard or lanai garden. Wherever you plant them, use care as the stems are somewhat fragile. Gently remove the starters from the container and carefully place in the soil. Make sure to support the delicate stems by packing soil around the stems. If you decide to go with seeds, germination will take between seven to ten days. And harvesting can begin at around one month.

Chinese parsley is a staple for any backyard home garden. It also grows nicely in containers found in lanai gardens. Use containers with proper irrigation, approximately two holes, about ¼” to ½ “in the bottom. If you are thinking about using a unique untraditional pot, you can always drill the holes yourself. As it is an herb, a large container isn’t required. I used a pot 5” in diameter and 5” deep. You will need good soil; inexpensive potting soil can be picked up at local nurseries or home improvement stores.

The leaves and stems can be immediately harvested if you plant starters. Just cut the stems and leaves that you need. Keep the leaves trimmed even if you aren’t using them. If you don’t, your Chinese parsley will flower and soon be coriander.

Here’s a tip! Place Chinese parsley where you can easily access it for trimming. Also, keep it in a spot where you can keep an eye on it. If ignored, it can quickly go to seed – trust me. A small container would be ideal for the kitchen. Just remember it requires a lot of sun.

Chinese parsley is not only a tasty ingredient for many dishes, it’s good for you too. It contains a lot of vitamins including A, C, E and especially K. It’s good for digestion, urinary tract issues and it lowers blood sugar. Truly a guilt-free ingredient.
Garlic chives, also known as Chinese chives, have been a long-time mainstay in Chinese food and makes another great addition to an organic home garden. According to my research, it has been around China for at least 4,000 years, currently growing in the southwestern regions of China. So versatile, it can improve any cuisine. It is used much like regular chives and is found in everything from dim sum to soups and sauces.

Like Chinese parsley, it makes sense to incorporate Chinese chives in your home garden. It works well in a backyard or lanai garden. Chinese chives require full sun and moist soil. Again, I prefer to use starters over seeds. Starters let you get going immediately. And Chinese chives are popular, so starters are easy to find. Seeds take about a week to germinate and harvesting can begin in about two months.

Although not as fragile as Chinese parsley, Chinese chives stems still need support. So gently remove them from the container and place it in the soil. Once planted, reinforce support for the leaves by packing soil around the stems.

Chinese chives are ideal for a home container garden on your lanai or even your kitchen. If you decided to use a container, make sure there is good irrigation. You may want to include a saucer under your container to capture any excess water.
Like Chinese parsley, Chinese chives planted from starters can be harvested immediately. Just snip the stems you need for your recipe. Please don’t be tempted to eat the bulbs from Chinese chives – they aren’t edible. But I do hear you can rub the bulb on insect bites for some relief. Unlike Chinese parsley, it’s not a bad thing if the chives flower. In fact, the flowers add a distinct touch to some recipes.

We all know garlic is good for you. While Chinese chives may or may not protect you from vampires, they are good for the kidneys and help with digestive issues.

Since we are eating these herbs, please do not pollute your organic home garden with pesticides. If you are noticing bugs, use organic Neem oil. It can be purchased at local home improvement stores. If you are not familiar with neem products, check out this article from the National Pesticide Information Center http://npic.orst.edu/factsheets/neemgen.html.

So bring in the Year of the Dog by adding these great herbs to your home garden. Share with your friends and ohana. And get creative in the kitchen. Here are a couple of recipes to get you started.

Recipe and photo courtesy of www.tigersandstrawberries.com

Toss together the chicken, wine, soy sauce and cornstarch and allow to marinate for at least twenty minutes, but no more than an hour and a half.

Heat wok on the highest heat your stove can produce until a thin wisp of smoke rises from the bottom. Drizzle oil into the wok and allow to heat for about thirty seconds or so, or just until the oil shimmers in the bottom of the wok.

Spread chicken in a single layer over the bottom of the wok and allow to sit undisturbed for about a minute. While chicken is browning on the bottom, sprinkle with the sugar and salt. When chicken has browned a bit, stir fry until almost all of the pink is gone from the chicken. You will see that browned bits of marinade have begun to stick to the sides of the wok.

Drizzle the wine around the sides of the wok, and deglaze, scraping up the browned bits.

Toss in the carrots and continue stir frying until all of the pink is gone from the chicken.

Add soy sauce, cilantro and scallion tops, and stir fry for about one minute more.

Remove from heat and drizzle with sesame oil.

Recipe and photo courtesy of www.epicurious.com

24 to 30 round dumpling wrappers (preferably with egg)

Combine all ingredients (except cilantro stems, chives, and wrappers) in a large bowl, then stir in cilantro stems and chives. Set bowl in a larger bowl of ice to keep chilled while forming dumplings.

Place a slightly rounded teaspoon of filling in center of a wrapper and moisten area around filling with water. Fold in half to form a crescent and press to seal. Moisten one corner and bring corners together, pressing them, to form a tortellini-shaped dumpling. Repeat with remaining filling and wrappers.

Cook dumplings in a large pot of gently simmering water until pork is just cooked, about 3 minutes. Transfer with a slotted spoon to a platter.