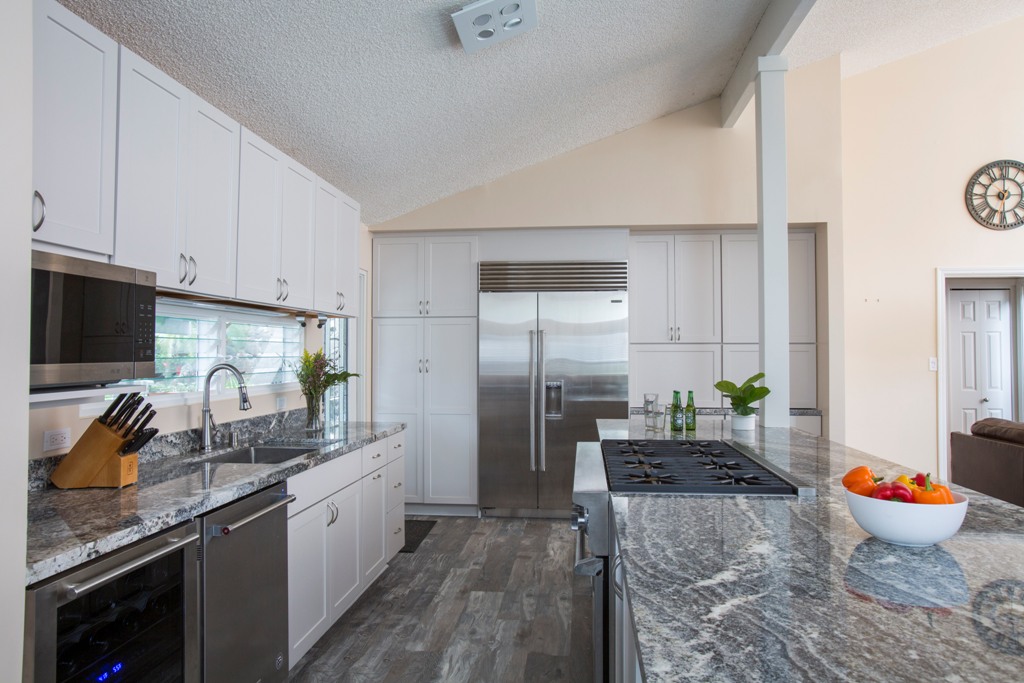 When one master chef decided on a kitchen remodel in his family’s multi-generational Moanalua home, he had a clear and distinct vision in mind—and only the best and highest standards would suffice. After all, when one’s livelihood (and true passion) is creating food fantasies for all to enjoy, that passion does not stop when one leaves the office and a kitchen remodel would have to live up to that standard. This homeowner needed a suitable place to make the magic happen at home.

If you prefer video, check out the video blog below.

Knowing the bar was set high for this kitchen remodel. this clever homeowner knew that he could not entrust anyone besides the professionals at Homeowners Design Center to make his vision a reality. When Jessica Omoto, designer at HDC, heard about the project, she knew they had their work cut out for them but was confident they had all the necessary ingredients to create a masterpiece kitchen remodel worthy of even a Michelin star chef.

“The homeowner found us through a contractor that we partner with quite a bit (on kitchen remodels),” Omoto recalls. “[The homeowner] actually is a restaurant owner, so he wanted to make sure that we took that into consideration when we’re working with him; [that] cooking is a big thing for him.” But what does this extra emphasis on cooking translate to in a modern, updated kitchen remodel today? Omoto takes us step by step through HDC’s process of taking this original kitchen from standard to spectacular.

“His original kitchen was not very large and not very functional,” Omoto describes, before giving one prime example: “The washer and dryer was in a closet that was by the entry door…” — a sore spot HDC remedied, according to Omoto, by relocating these appliances and closet to enlarge the kitchen. They also added a wall that was not even a part of the original floorpan to help elevate the spatial design, as well as adding in a gorgeous (and grand) kitchen island that offered not only some desired extra counter space but also some extra seating as well. Speaking of the countertops, a natural granite stone with a breathtaking marbled aesthetic in the color of blue sky is not only extremely functional—providing that vital prep space for any culinary endeavor— but it’s also an eye-catching centerpiece to the kitchen remodel that really serves to elevate the style and ties the whole room together while giving it a modern, chic appeal.

Equally worthy of a culinary guru were the professional grade appliances introduced, which included a mixture of Thermador and Viking brands, such as an impressive pro-range with an immense amount of burners, a massive double-door refrigerator, a coffee maker, a wine cooler and a microwave—all cleverly “hidden” within the island and cabinetry in order to eliminate any clutter and free up the maximum amount of counter space possible.

This “magic” cabinetry that HDC introduced for the kitchen remodel was Diamond brand Montgomery framed cabinets with a Shaker style door, which HDC painted a soft, warm Dover tone to tie-in nicely with the rest of the room’s decor.

“He had a lot of wants that he wanted in the kitchen space and just figuring out how to get all of that [to fit] was a bit of a challenge,” Omoto admits of the project. But in the end, nothing but smiles all around were seen. Everyone one was absolutely pleased with the final product. HDC had the pride and honor of serving up yet another kitchen remodel wonder and the homeowner and his loved ones now have the delicious pleasure of the daily cooking of delicious delights in their new dream kitchen.

To see more kitchen remodel projects by Homeowners Design Center, click on any of the photos above or wherever you see their name (HDC).