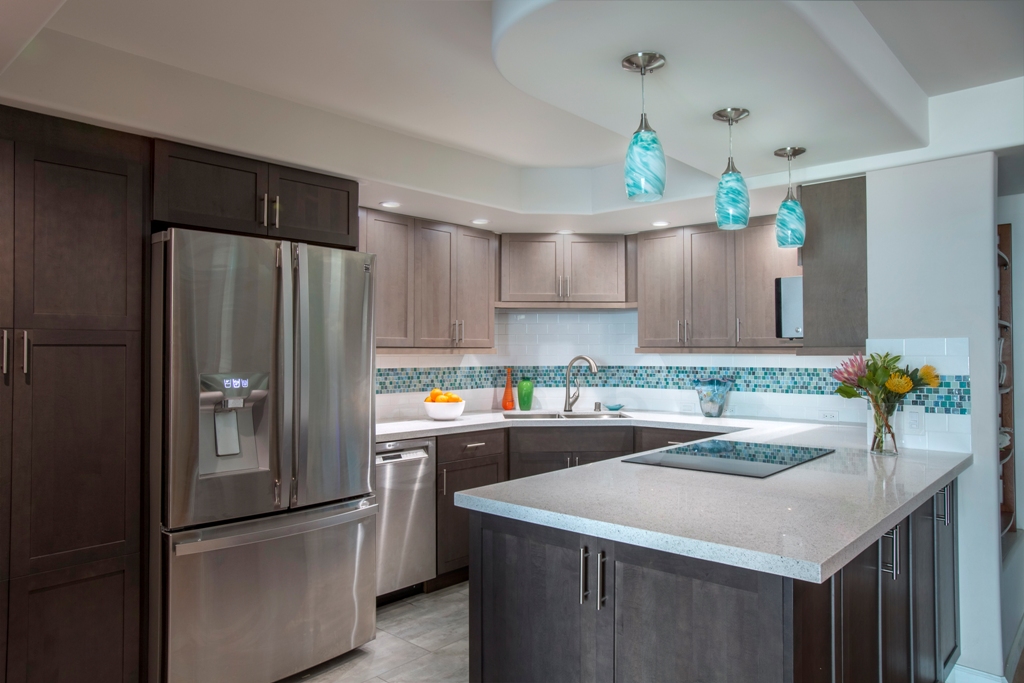 When a downtown Honolulu condo owner decided that it was time for a kitchen remodel, he relied on advice from friends and a local contractor who all pointed him to Homeowners Design Center (HDC). Having worked with HDC in the past, these folks knew that the expert team could get this condo owner exactly what he was looking for in a kitchen remodel.

Jessica Omoto, designer at HDC, shared her initial take on the original state of the kitchen when HDC arrived on the scene: “The kitchen wasn´t as functional as it could be, [especially] for the smaller space that it was.” Omoto then described the two main kitchen factors that first attracted her attention: “It had a lack of storage… and it also had an angle in it.” These two areas were going to receive major attention in the kitchen remodel.

On top of the clear need for additional storage and the challenge of adapting an incredible renovation around a uniquely angled kitchen, Omoto also shared that one of the specific objectives voiced by the owner was concern over a stacked washer and dryer that was in the kitchen, which he wanted to camouflage. HDC was able to do just that by designing an ingenious and stylish “disguise” via clever cabinetry for the appliance, ensuring that it seamlessly blends in with the rest of the kitchen aesthetic.

Also a concern in the kitchen remodel was the feat of somehow getting all of the kitchen appliances into the kitchen, without having it feel cramped and overrun. Omoto shared one specific way they were able to address this: “We lifted the microwave off of the countertop to give them a little bit more counter surface.” HDC also made best use of what could have been wasted space, strategically placing the sink where the kitchen was angled.

This working with angles is no job for the faint-hearted, or the careless, as Omoto shared that this was actually one of the biggest challenges of the kitchen remodel. Of particular demand of attention? “Making sure that everything lines up correctly with those angles and can open and function”, says Omoto, which according to her is something that sometimes gets lost when designers are developing a remodeling plan. But not with HDC, as Omoto clearly conveyed that attention to detail and proper planning are top priorities to these designers, ensuring that everything falls into place and fits together accordingly.

Regarding the actual brands that were used for this kitchen remodel, Omoto shared that in order to blend them expertly with the tiled floors chosen by the condo owner, HDC went with Kitchen Craft maple wood cabinetry, opting for slightly varying colors on the lower and tall sections (thunder stain and winter stain, respectively). The above-mentioned appliances were chosen by the owner also, who opted for the Kenmore Elite brand, and HDC went with engineered quartz countertops (Cosentino Silestone® countertop in white diamond).

Finally, and perhaps the most eye-catching and aesthetically appealing feature of the kitchen remodel was the tiled backsplash, which was an iridescent showstopping detail from Daltile brand that perfectly infused cool, oceanic colors into the coastal kitchen. The chic tile also offered the ideal complement to the gorgeous pendant lighting, all of which culminated in yet another HDC renovation revelation.

To see more projects and kitchen remodels by Homeowners Design Center, just click on any of the photos above or whever you see their name (HDC). 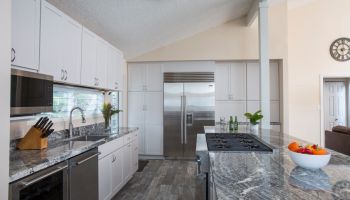 Aloha Hawaii Home & Garden Network, When one master chef decided on a kitchen remodel in his family’s multi-generational Moanalua home, he had a clear and distinct vision in mind&mda ...
by Andy Beth Miller at Jan 23, 2021
Read more ...