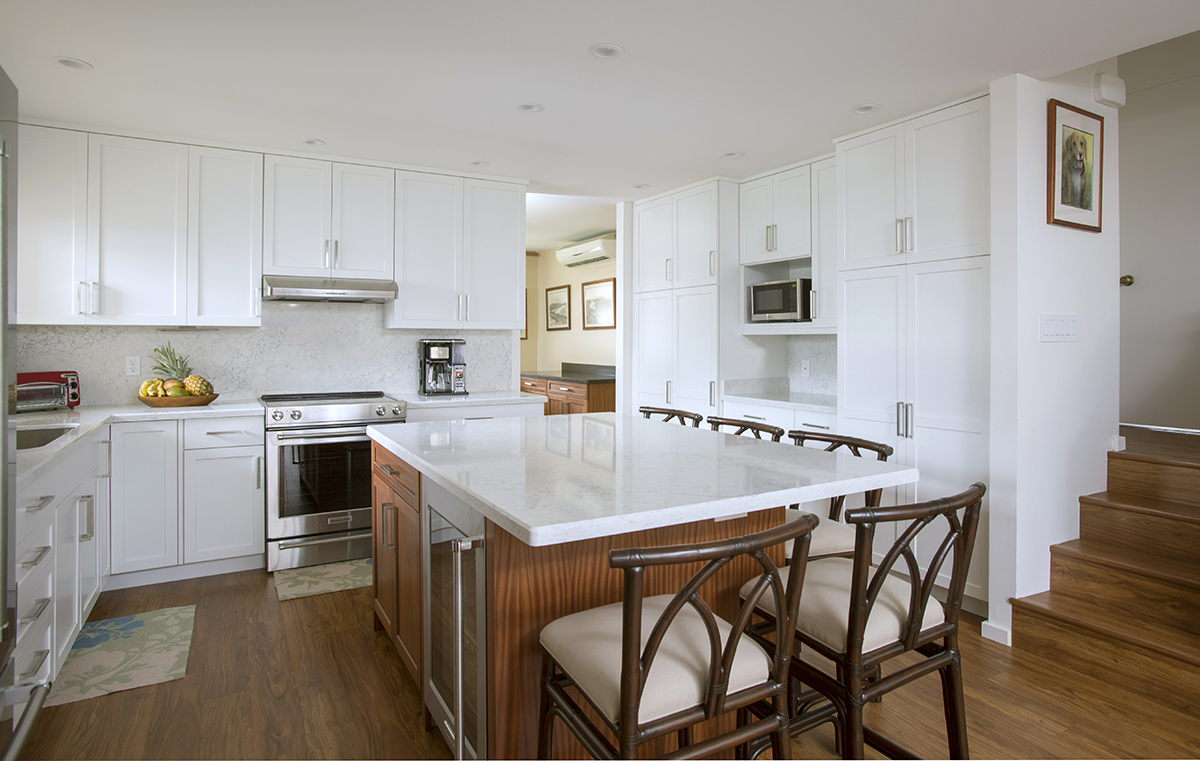 On the hunt to update and open up their kitchen, a pair of Kaneohe homeowners recently hired the experts at full-service design company Homeowners Design Center to help with the kitchen remodel. Past clients who had used HDC for a kitchen remodel once before, the homeowners were so pleased with the results that when it came time to revamp their next cucina (15-20 years later!), they knew exactly who to turn to to handle their new project.

Today, we sit down with Jessica Omoto, a lead designer at HDC, who explains the specific vision that the homeowners brought to the table when procuring HDC’s services for the kitchen remodel. “We were [tasked with opening] the space up,” Omoto shared. Specifically, Omoto stated that the homeowners “originally had a return that kind of blocked off the kitchen from the adjoining room, and they wanted to open the space up by taking that out.” In this way, HDC was able to help them create more of a free flow to the kitchen remodel; an organic environment for living, gathering, entertaining and most important of all — especially in Hawaii  nei — cooking!

“They have children and grandchildren that come over to visit, so they wanted to have a space where they could all congregate within the kitchen, as here in Hawaii, the kitchen tends to be kind of a hub,” shares Omoto. For this reason, an island with plenty of seating around it was incorporated into the design of the kitchen remodel, ensuring that there would be ample room for the host who’s cooking and the guests and family to share the space together without feeling cramped. In this way, says Omoto, “Everyone is included, and folks can sit down and eat and interact with one another in the kitchen space.” This was the kind of kitchen remodel the family had envisioned.

Also incorporated into the kitchen remodel are various clever and creative built-in features, such as sunken in shelving within the cabinetry, creating the perfect space for keeping the microwave, preventing it from cluttering up the valued counter space. A handy wine and beverage cooler is also hidden away as a built-in feature within the kitchen island cabinetry. As for the brand of cabinetry used in the kitchen remodel, the homeowners used two different ones. For the main cabinetry —the L-shaped space in the kitchen — Dura Supreme brand was used and covered in a white paint finish. Canyon Creek cabinetry was used in the island and on a buffet table in the adjoining dining area, then expertly matched to the other cabinetry utilizing specially manufactured sapele wood doors.

LG Viatera engineered quartz countertops in the kitchen and dining area, in slightly variant shades, were chosen for both their durability and timeless aesthetic. The flooring, a waterproof luxury vinyl plank that matches the rest of the home, adds a lovely bit of warmth and a comforting aura to the cozy and inspired kitchen remodel.

State-of-the-art KitchenAid appliances adorn the area and add efficiency and style, while lovely recessed lighting, handled by a contractor that HDC was able to seamlessly coordinate with, ties the entire space together, resulting in a picture-perfect entertaining enclave that is not only efficient and open, but stunningly stylish and timeless in its aesthetic.

To see more projects by Homeowners Design Center, or to find how they can help you with your kitchen remodel, click on any of the photos above or wherever you see their name.