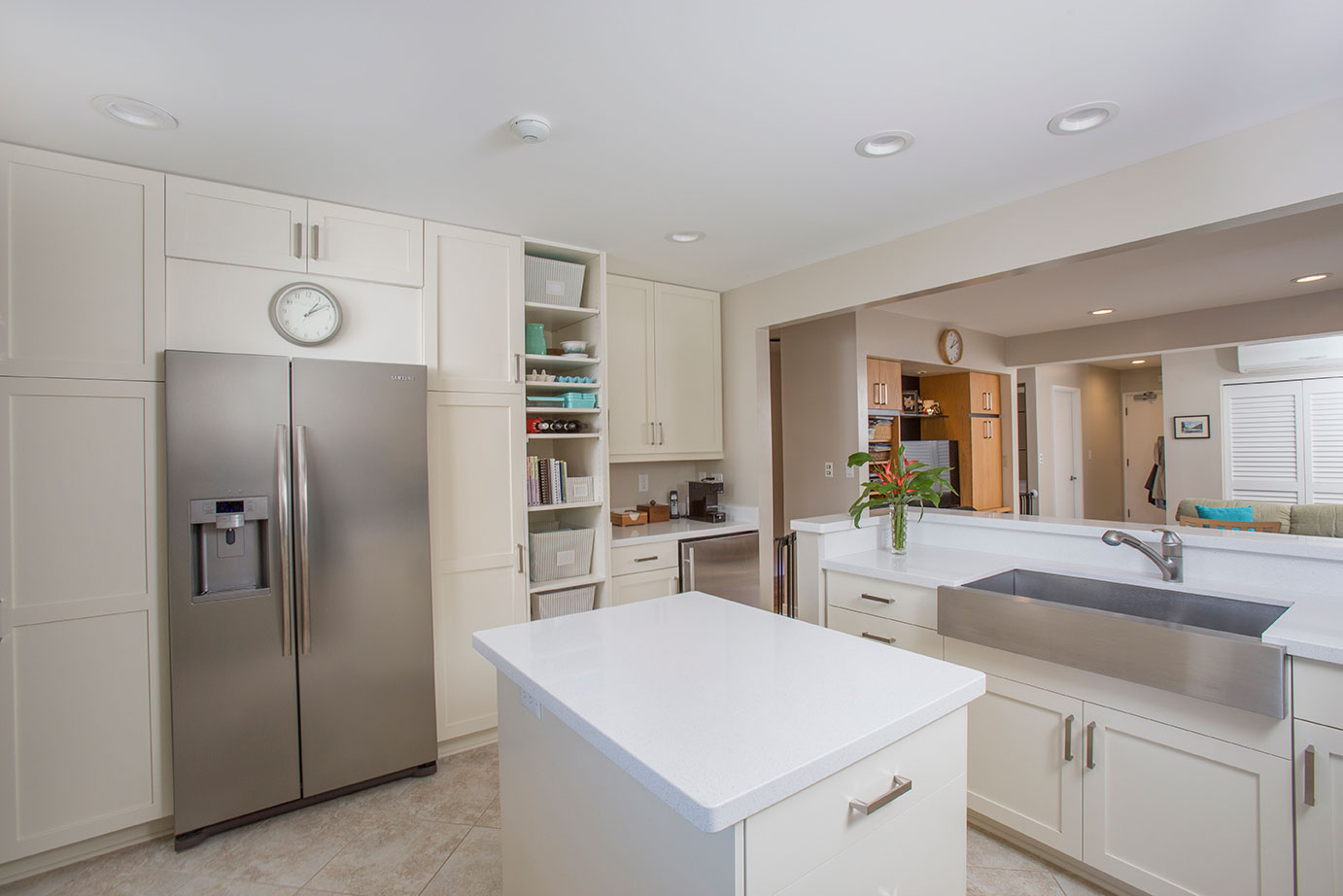 After hearing rave reviews from friends who had procured Homeowners Design Center’s kitchen remodel services in the past, one Hawaii couple reached out to the full-service company in hopes that these experts could deliver similar, stellar kitchen remodel results for their own island abode.

Jessica Omoto, a lead designer for the local company, shared of the initial state of the kitchen. “It wasn’t a terrible kitchen to start with,” Omoto says. “It was a little bit outdated—as far as the cabinetry styles, and the function of it could be improved a bit.” So they came to Homeowners Design Center to help them with the kitchen remodel task. And help them they did.

“One of the things they wanted to do was open up their existing kitchen space into the next room,” shares Omoto. “They currently had wall cabinetry above the pass-through opening between those two [adjoining] rooms, so they wanted us to completely take out those cabinets in order to open up the space.” And according to the after photos, this mission was more than accomplished: It was completed with style and flare, resulting in an airy cucina that no longer feels pinched or closed off from the rest of the abode.

An impressive feat in itself, this opening of the kitchen pass-through was merely the beginning stages of the kitchen makeover, as Omoto shares more challenges that the team faced with the kitchen remodel. “They had this weird, kooky little niche built into the wall that they wanted to go ahead and get rid of as well,” she says. Apparently, the addition had been built by the couple in a previous update and was no longer serving the desired aesthetic or purposes they originally commissioned it to provide. So out it went, and in its place; nothing but loads of lovely open-air space.

The streamline aesthetic of minimal clutter and smooth, clean lines also was of importance to the homeowners. In order to accommodate this vision for the kitchen remodel, Omoto shares how Homeowners Design Center was able to seamlessly incorporate both the oven and refrigerator within the cabinetry, so no extra space was taken up with appliances jutting out into the living spaces. Adjustable shelving was also a welcome addition that perfectly completed the sleek kitchen theme.

For cabinetry, the design center chose Canyon Creek, as the brand had offerings that matched seamlessly with a same-brand paint color that the homeowner specifically had chosen. Omoto explains that Silestone quartz was used for the countertops, selected for its low-maintenance and “to tie in the flooring, the paint color on the wall, and everything.” Recessed lighting completes the bright, light feel of the kitchen, and the existing flooring was effortlessly incorporated into the overall, outstanding design of this kitchen remodel.

Needless to say, the homeowners were thrilled with the outcome, enough to have already sent their own referrals to the company as new clients!