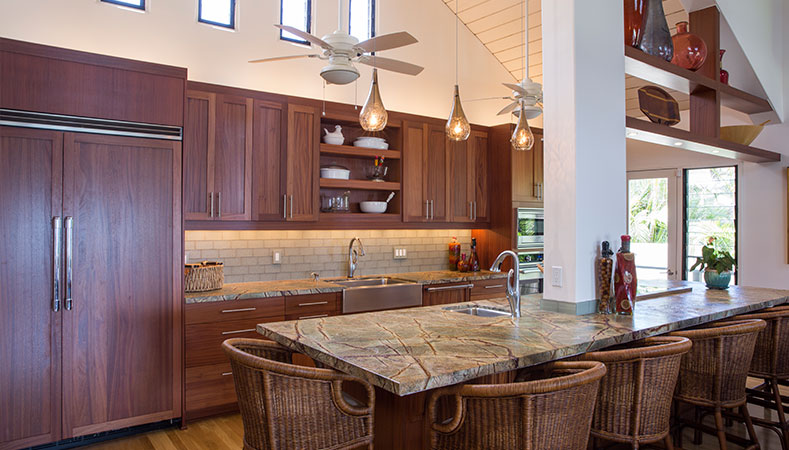 Having had their hearts set on remodeling their closed-in kitchen for quite some time, one Hawaii Kai husband-and-wife team finally decided to take action. Enlisting the help of their professional designer friend, the couple was able to put together their dream plans, and brought these desires to local Hawaii kitchen remodeler and designer, Homeowners Design Center, in order to make their dream a reality.
In-house kitchen remodeler and designer Jessica Omoto explains the initial process. “She helped them come up with the idea of what they needed to get the project going,” says Omoto of the couple’s designer friend, “And then we helped them on the final touches … taking what the designer had, and then doing a few tweaks here and there.” 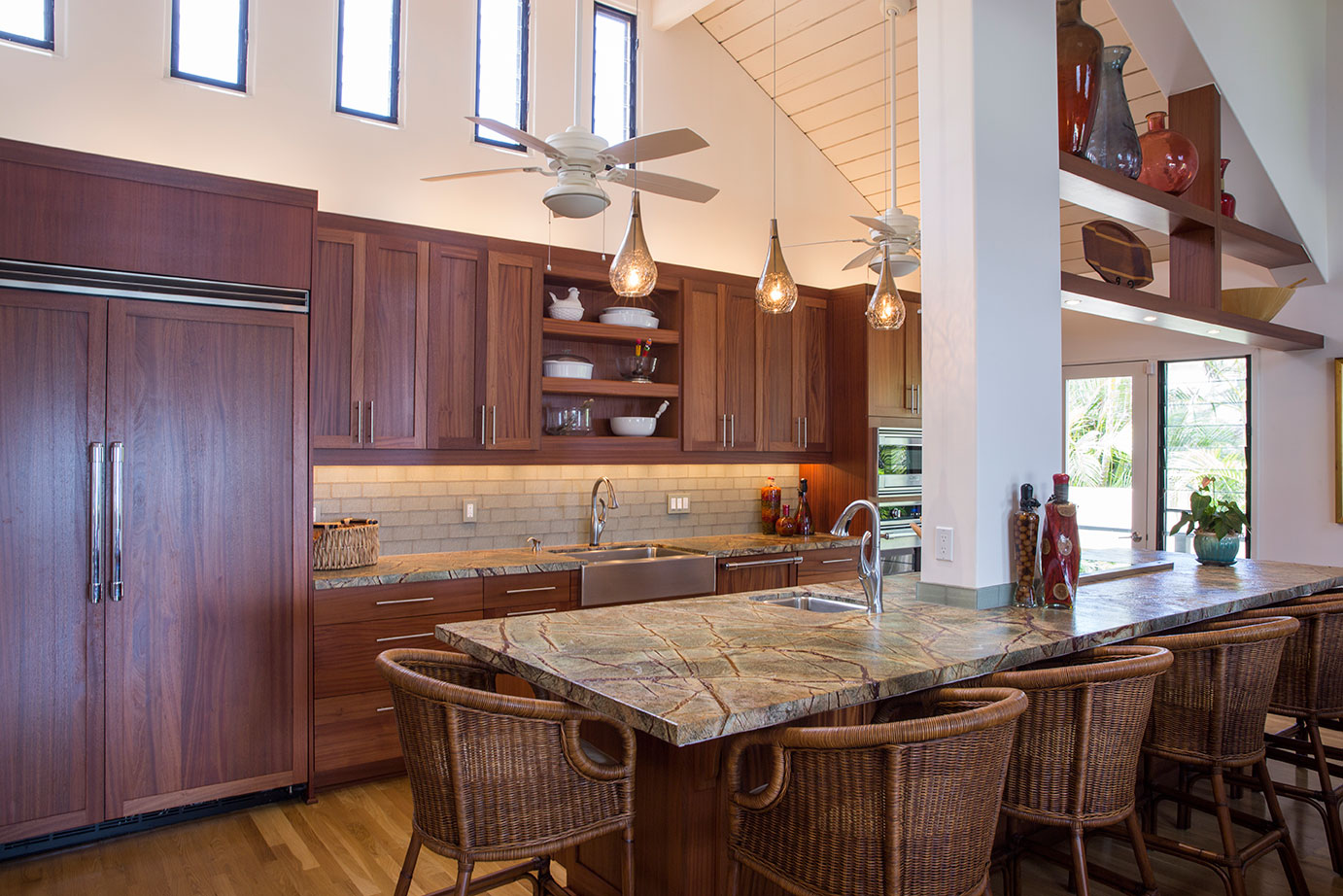 Knocking down a wall standing where the cooktop now is made this dream kitchen remodel happen.

When asked what the initial state of the project was when brought to kitchen remodeler Homeowners Design Center, Omoto explains of “a closed galley kitchen,” which the couple desired to completely revamp. And now, after the remodel—in which Omoto focused on opening up the entire area for greater flow and a more modern and efficient utilization of space—Omoto shares that the resulting wonder kitchen is undoubtedly “much more open now.” Specifically, kitchen remodeler Omoto explains how they “...took down the [kitchen] wall, where the cooktop currently sits [which was also blocking a gorgeous ocean view],” and worked on an existing load-bearing pillar to “...dress it up a bit, making it look more appealing—by enlarging what that post is in true size—and completely opening up the space.” 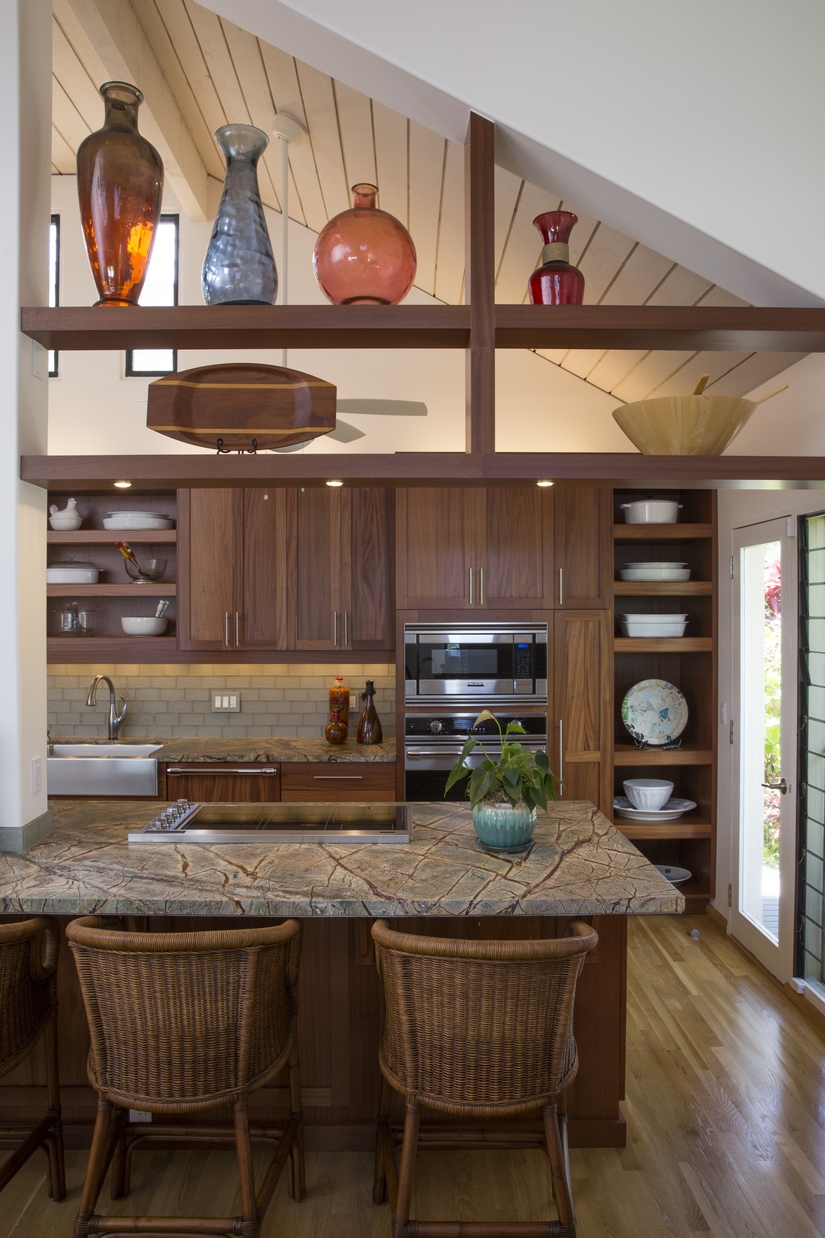 Utilizing open shelving helped to create an even greater openness to the kitchen.

Adding to the kitchen remodel’s impressive aesthetics are its cutting edge Viking brand appliances—a flattop cookstove, as well as a fridge and dishwasher featuring matching panels to the cabinetry—which the couple chose themselves, and which Homeowners Design Center worked to incorporate into an effortless flow within the rest of the scope of the project.
According to kitchen remodeler Omoto, the Canyon Creek sapele wood cabinetry also made a significant change in the outcome. By utilizing open shelving over the sink area, as well as floating shelving over the island, Omoto explains that it “really helps to free up open space.” The pro kitchen remodeler also points out that the cabinetry’s lovely whitewash finish “helps to soften the yellows that you’ll find in sapele woods.” 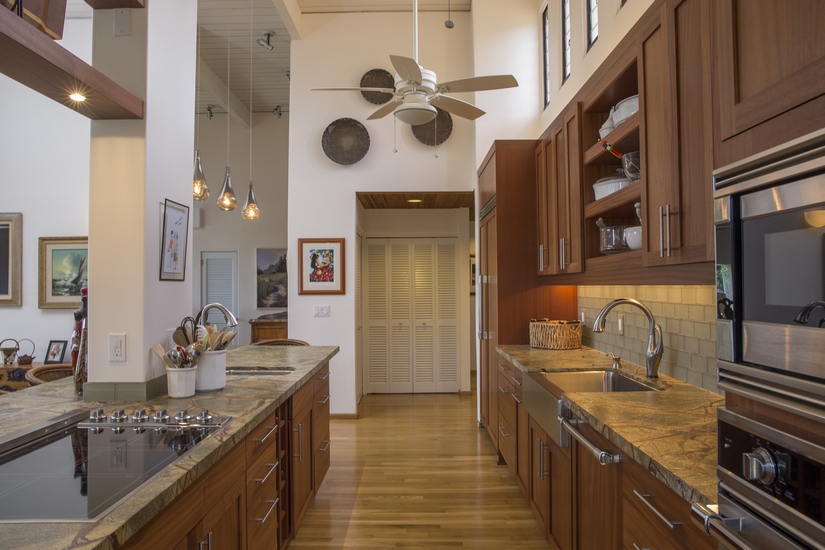 The homeowners kept the existing oak wood flooring by sanding it down and adding a new finish.

Again proving their unique ability to create customized, winning results with already existing interiors, kitchen remodeler Homeowners Design Center was able to utilize the couple’s existing wood oak flooring within the overall scope of the project, resulting in an effortless and appealing aesthetic flow between the new and “old” kitchen elements. Perhaps the piece de resistance of the kitchen remodel is its stunning granite countertops, chosen in a color known as “rainforest,” which, as described by Omoto, “...has a nice vein that runs through it.”

To watch the video and hear kitchen remodeler & designer Jessica Omoto describe this project, just click on the image below.

When all was said and done, the couple could not have been more pleased with the results of their kitchen remodel-a project which Omoto is equally proud of. “It’s the dream kitchen they’ve always wanted,” she smiles. To see more projects by kitchen remodeler Homeowners Design Center, or to learn how they can help you with your next home or kitchen project, just click on the company's name or on any of the photos above.