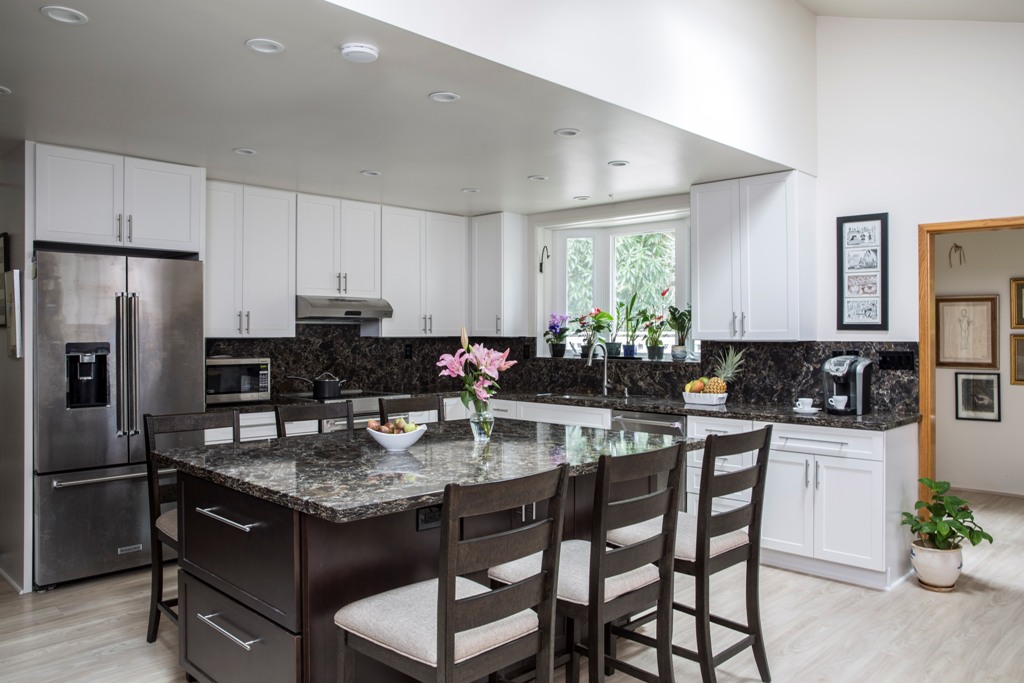 After becoming a widow, one Hawaii homeowner sought to do something good for herself and her children, so she decided to treat them all to a much-deserved kitchen remodel. Having heard glowing reviews from her contractor about Homeowners Design Center, she recruited the full-service design company to help her with the kitchen remodel of her dreams.

Regarding the homeowner’s specific objectives with the kitchen remodel, HDC designer Jessica Omoto explained, “Her kids were getting to that age where they are just about ready to go away to college, and this was just something that she wanted to do for herself and the kids to give them that nice, big, roomy space that they could use well.” More specifically, Omoto shared that “She wanted to do something to open up the space.” Omoto also explained how there was a return that was blocking the kitchen off from an underutilized space, which the homeowner wanted to open up. Omoto also mentioned how “bringing in some tall storage space that [the homeowner] could use in the lower section as a pantry-type storage space, while the upper section would be more decorative” was very important in the kitchen remodel for the homeowner.

Omoto and HDC were able to expertly deliver the homeowner’s desired kitchen remodel, while also adding some ingenious and creative touches to further improve the style and function of the space, such as the incorporation of a generously sized kitchen island that is large enough to fit the entire family around, yet is not too vast to where it causes the kitchen to feel cramped in any way. A focal point of this snazzy kitchen are the eye-catching countertops, which Omoto shared were Cambria engineered quartz in the color of Laneshaw. “We went with a darker color that had a lot of movement within it, allowing us to tie it in and bring color into the space, without being just this big, dark blob,” Omoto said, which is something that the homeowner had also expressed really wanting in the kitchen remodel.

HDC was then able to perfectly blend the countertops with the cabinetry, choosing a Diamond Brand cherry wood cabinetry with a thatch stain, which Omoto shared gives it a nice “brown-grey tone” that also helped tie it into the floors, which had similar tones in it, thus allowing for “everything to work together really nicely” in the kitchen remodel. Speaking of the flooring, HDC replaced the flooring throughout the entire home with vinyl plank, which Omoto shared is great because it needs virtually no maintenance and is highly durable, while also being highly versatile and stylish.

Perhaps the highlight of the kitchen remodel was the tall storage space and cabinetry that HDC brought in, which provided both the function of lower storage with Shaker doors, while having glass doors in the upper cabinets for the display of the homeowner’s showpiece items. This clever addition in the kitchen remodel really created a lovely statement look, as well as provided a necessary function that the homeowner wanted to incorporate into the space.

Staying with a classic motif and the theme of timelessness for the kitchen remodel, the homeowner chose modern stainless steel KitchenAid appliances, which completed the look perfectly. In addition to all of this, HDC even spruced up the existing bay window in the kitchen, carrying the countertop surface into the decking area of the space, thus ensuring future durability and protecting it from unnecessary wear and tear.

Needless to say, the homeowner was ecstatic with the results of the kitchen remodel, and she was most happy to know that this renovation had left her with a timeless kitchen, giving her the peace of mind that it would last for years to come, while still remaining in vogue.

To see more kitchens by Homeowners Design Center (HDC), or to get help with your kitchen remodel, click on any of the photos above, or wherever you see their name.