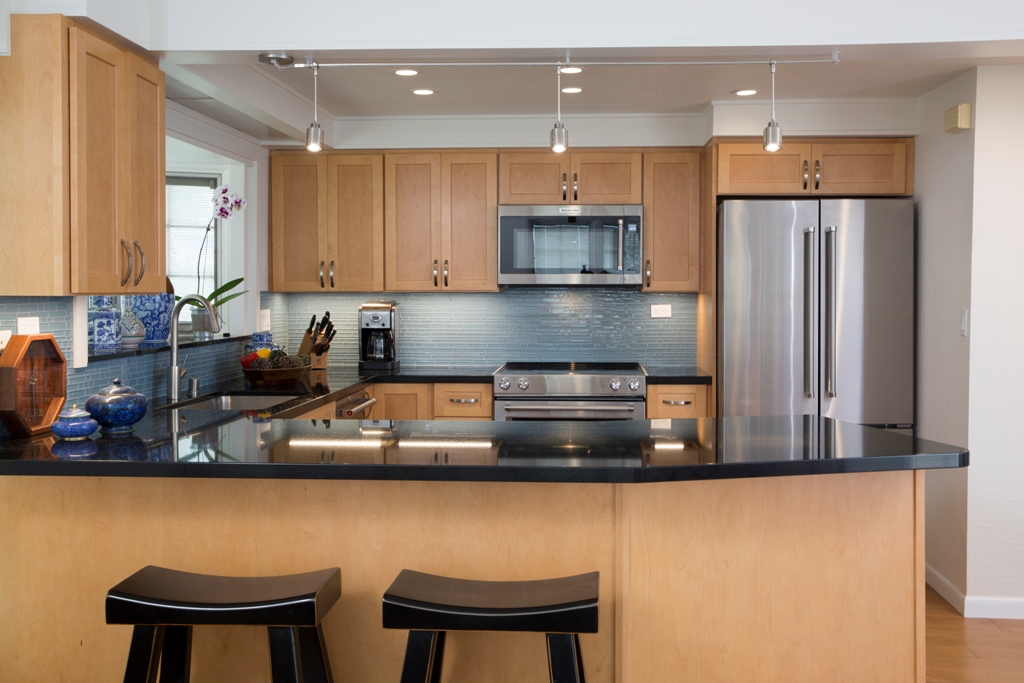 When a local Oahu homeowner decided that it was time for a kitchen remodel, she reached out to Homeowner’s Design Center (HDC), a local full-service kitchen remodeler. HDC lead designer Jessica Omoto shares with us about their initial meeting.

“She did like the layout that she had, and it worked well in her smaller space, function-wise. It was mostly a matter of updating everything,” Omoto shares. Omoto went on to explain that the kitchen was more from the '80s or '90s era and filled with darker oak paneling and accents, which were neither bright nor vibrant: two qualities that the homeowner very much desired her kitchen to exude in their kitchen remodel.

When she came to Homeowners Design Center, the homeowner had specific ideas in mind for their kitchen remodel, but really needed to find professionals who could take the reins of the project. Luckily for her, HDC’s niche expertise is being able to help the homeowner handle and coordinate all facets of such a kitchen remodel.

“She was looking for help with coordinating everything (in the kitchen remodel), from choosing materials to helping her put the colors together,” says Omoto. “She needed a company that could help assist her in delivering the whole package.”

Literally starting from the ground up, HDC replaced the old kitchen flooring with a lovely Mirage brand hardwood floor. “Mirage is a very nice hardwood floor that has an excellent finish on it,” describes Omoto, laughing as she adds, “I kind of think of it as the Mercedes versus the Toyota of wood floors!”

Dynasty brand maple wood cabinetry stained in a light honey was chosen for the kitchen remodel, which Omoto shares is “close to a natural stain, but a little bit darker, which really helped to brighten up the space and get away from the dark [reddish] oak that was there previously.” HDC also used white paint for much of the wall space, the bay window and the moldings surrounding the cabinetry to further lighten the room’s mood.

And speaking of mood, the homeowner had one interesting request of HDC for the kitchen remodel; she actually wanted her home to make her “feel blue.” But, before you get confused, Omoto explains that the homeowner simply loves the color blue, so she specifically requested that the color be infused throughout her kitchen. HDC was able to perfectly meet this request via the clever addition of blue glass tile.

“She liked the color blue and really wanted to bring blue into the space. She also has a view of the ocean, so [the glass tile] really helped to tie in that whole blue scheme,” says Omoto. Blue was to be the theme for this kitchen remodel.

As for the counters, a Sensa granite was chosen, which Omoto explains is especially nice, because “it has a built-in sealer in it, so you don’t have to keep refilling the natural stone, which makes it more durable.” The color, absolute black, also complements and anchors the overall color scheme of the entire kitchen, blending effortlessly with the brighter blue of the kitchen remodel.

HDC then updated her existing lighting, as well as added a brand new matching (and modern) complete suite of KitchenAid appliances, including a modern user-friendly French door fridge.

Omoto explains how HDC even added drawer space within the kitchen peninsula “to give more accessibility and ease of use storage.” They also changed blind corners to corner cabinets for that very same reason.

All in all for this kitchen remodel, the homeowner was left with a brand new modern kitchen that keeps her feeling blue…every single day.

To see more kitchen remodel projects by Homeowners Design Center, click on any of the photos above or wherever you see their name.