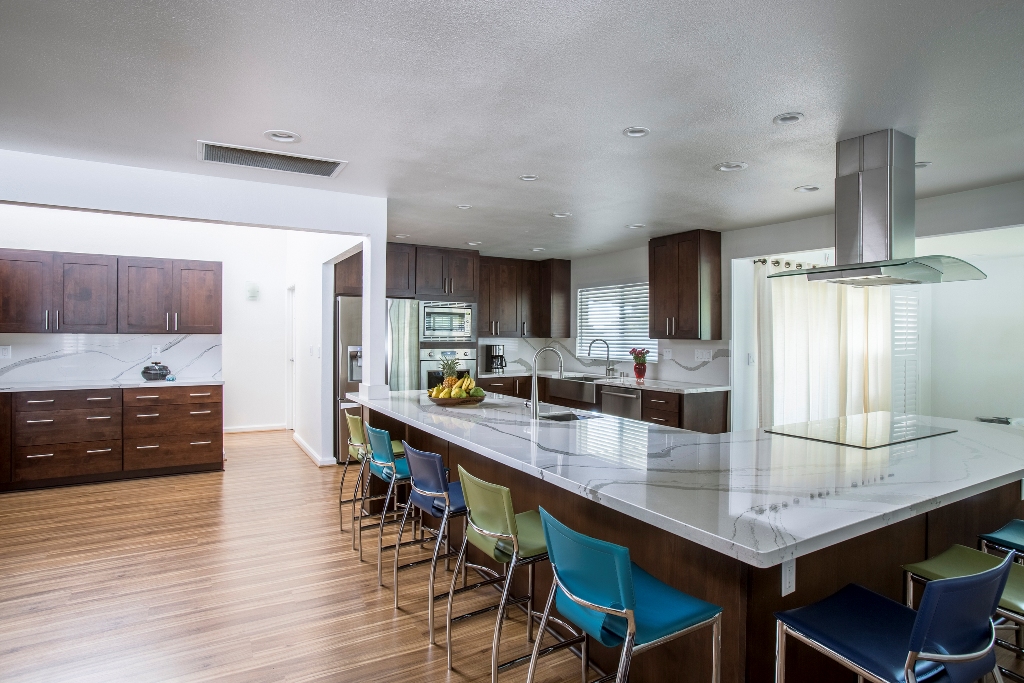 Homeowners Design Center, an Oahu remodeling and custom design company, recently worked with a local family on their kitchen remodel in their single-family home. The homeowners are a couple with a daughter, who really wanted to focus on having a kitchen that would be conducive to the family’s needs as that daughter grew up, including social times after school with friends, completing homework on the workspace at the kitchen counter, sharing family dinners and more.

HDC staff designer Jessica Omoto explained what exactly the homeowners were looking for in terms of their ideal kitchen remodel. “They were looking for a way to enlarge the kitchen and make it more functional for entertaining, especially as their daughter grows.” They also needed seating for dining and after school activities, such as doing homework and socializing with mom or dad as they cook, and the homeowners were especially concerned with having a dining table that might take up a lot of space. Omoto explained how HDC handled this in the kitchen remodel by adding some clever bar seating and extra counter space, thus ridding the need for a formal table altogether, while also reducing unnecessary clutter in the kitchen.

Omoto also shared that they actually broke down two walls in the kitchen remodel, one of which was load bearing, thus doubling the size of the room, which was not only a complicated feat that they were able to successfully accomplish, but it also made a huge difference in opening up the space. Bringing down a load bearing wall adds a level of complexity to a kitchen remodel. As for the storage, Omoto explained how HDC was able to add some storage options, which enabled the homeowners to better utilize the limited space. “The side of the kitchen, where the refrigerator is, was really underutilized. It was kind of a space that they didn’t know what to do with. So, we added a lot of storage there, as well as some additional countertop space.”

As for the appliances, the homeowners had very specific desires, which Omoto explained, “They chose a french door oven, which is more of what you usually find in a commercial [professional] applications, where the doors open sideways instead of up and down like a traditional home oven.” Omoto explained that this type of oven is especially used for serious baking, roasting, and entertaining, all of which aligned with the homeowners needs perfectly. Another request was for a secondary sink, which HDC was able to incorporate into the island, allowing for multiple cooks to be in the kitchen at once. As for the preferred brands, the homeowners opted for GE Brand appliances and a Bosch dishwasher.

The quartz countertops are Cambria brand in the color of Britannica, which Omoto explained that the homeowner was wild about. In fact, she loved the design so much that she requested HDC design everything around this feature in order to highlight it like a work of art.

For the cabinetry, HDC went with Dynasty by Omega brand in alder wood with a warm chestnut finish. “We were looking for a brown tone that would pick up the flooring and also complement the counter,” she explained of the stellar choice.

When all was said and done, Omoto shared that the homeowners were “super happy” with the final results. Another kitchen remodel home run hit.

To see more kitchen remodel projects by Homeowners Design Center, or to find out how they can help you with your kitchen remodel, click on their name above or on any photo.