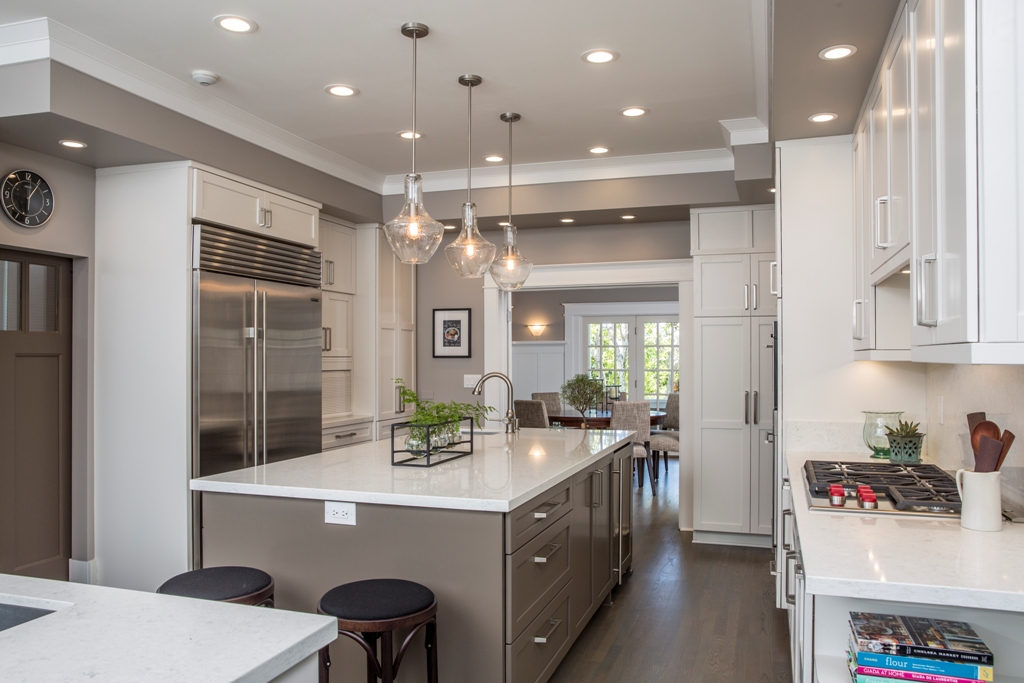 When a local couple finally decided to do their kitchen remodel, they sought out a trusted contractor to help. Lucky for them, the contractor pointed them to Homeowners Design Center, an Oahu remodeling and custom design company, which the contractor keeps on speed-dial. HDC staff designer Jessica Omoto explained to us what exactly the couple was looking for in terms of their ideal kitchen remodel. Omoto explains, “They wanted to open up the space, add in a second island and update their appliances.”

Regarding the original condition of the kitchen, Omoto shares, “They had a return on their kitchen cabinetry and counters that created somewhat of a separation between an underutilized space and the kitchen space, making for an odd space that wasn’t really being well utilized.” They also had a dining table that was taking up a lot of space that they were hoping to free up in the kitchen remodel, which HDC handled by adding some clever bar seating and extra counter space to the second island, thus allowing them to get rid of the table altogether and reducing the clutter in the kitchen.

Speaking of the sink, Omoto shares how HDC “moved the main sink, which was originally located on the return, over to the secondary island.” This allowed HDC to completely revamp the cabinetry for the kitchen remodel, while adding several unique and ingenious, yet stylish, storage solutions. Omoto says of the cabinetry, “We used our Canyon Creek line, specifically because the paint colors on the cabinets are Sherwin Williams paint colors, and with that line, we have the flexibility to choose any of their paint colors and apply it to the cabinetry.” Omoto also shares that they decided to go with “a frameless construction, so that you have a cleaner line, without gaps and spaces.”

As for the appliances, the homeowners opted for stainless steel Sub-Zero and Wolf brands, which include a cooktop with a downdraft, a nice refrigerator and an oven. One unique feature that Omoto discusses is the incorporation of a “hidden microwave” and wine cooler, which were both carefully concealed within deep cabinets, making for a much more aesthetically pleasing and streamlined space. Omoto also spoke about another clever addition to the kitchen remodel, which was a hidden-away mixer area, complete with a retractable pop-up counter space, which can be instantly folded away again after use. This is especially perfect for the wife, who often bakes and is in need of extra space when whipping up recipes.

The countertops are an LG Viatera brand, engineered quartz surface in the color of cirrus, which is preferred by many homeowners for its low-maintenance qualities. For the flooring, HDC sanded and refinished the original wood floors with a stain that complements the new space’s aesthetics.

The piece de resistance of the kitchen remodel are the light fixtures, which are truly individual works of art, infusing the perfect amount of flavor and good taste that everyone wants to define their dream cucina.

To see more kitchen remodel projects from Homeowners Design Center (HDC), click on any of the photos above or wherever you see their name.