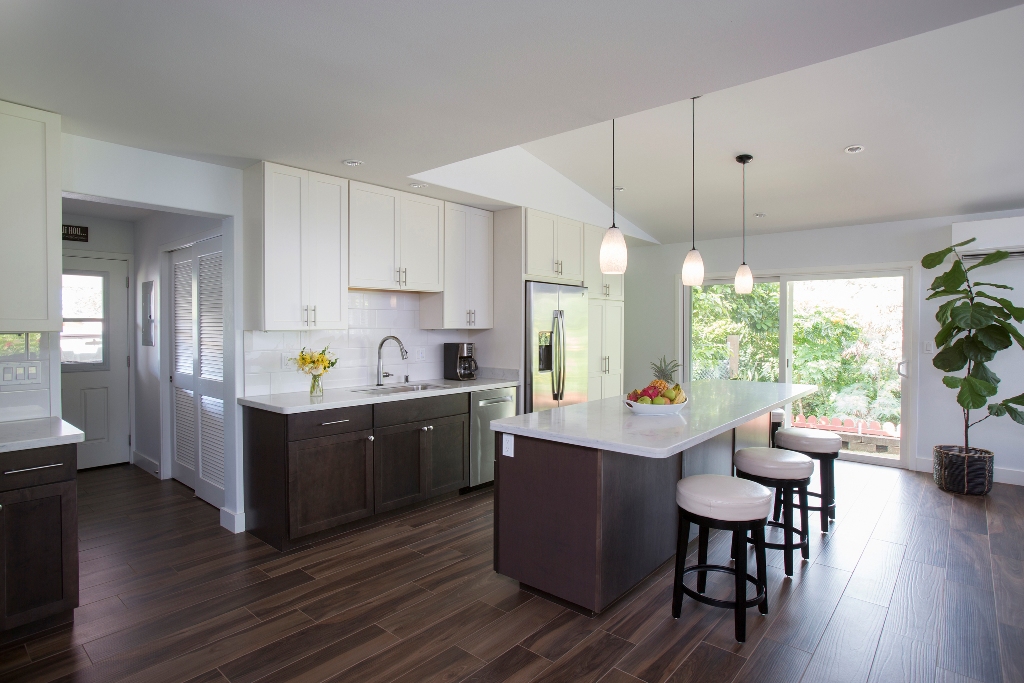 Upon hearing about the beautiful kitchen remodels that Randall Omoto and the other designers at Homeowners Design Center (HDC) do every day from their general contractor, a pair of Mililani homeowners decided to recruit these full-service, design experts for their own kitchen remodel.

Regarding the homeowners’ specific objectives for their kitchen remodel, Omoto explained that this was a type of project that HDC sees often. “It is a common story we see, where there is a space that no longer functions as originally planned. Oftentimes, they have a space that is underutilized and a space that is over-utilized, and they just want to combine [it] into a functional space.” More specifically, the homeowners had a small kitchen with some very interesting elements, which posed some challenges in the kitchen remodel for the HDC team. “You can see where the old kitchen was [because] there is a change in height in the ceiling,” Omoto explained. The ceiling went from a very low-height space to a vaulted ceiling with open beams, and what HDC ended up doing with it, encasing it in drywall and really opening up the space, even go so far as turning the kitchen design 90-degrees, made all of the difference in the kitchen remodel.

Omoto shared in more detail how HDC was able to expertly deliver the homeowners’ desired kitchen remodel with the help of their modern, computer, 3D software. “Sometimes we will be showing the homeowner a space that they thought they wanted [in the kitchen remodel], and then use the computer program to [show them another option], then say, ‘How about this?’” Omoto then explained the common results from this scenario with a laugh, “Many times they say, ‘We never thought of that!’ And this just happened to be one of those times.” A kitchen remodel is oftentimes a collaborative effort.

This pleasant surprise for the kitchen remodel included a plethora of classic touches and designer features, including an entire suite of state-of-the-art GE appliances. Another unique facet of this kitchen remodel was the tile flooring, which actually resembles wood. Omoto describes why tile is a great choice for a kitchen remodel, explaining that it is a “super-hearty material” that “lasts forever.” As for the cabinetry, Omoto said that HDC installed Diamond brand Shaker door cabinets with a thatch stain on the bottom, which he explained provides a “nice, warm tone,” that pairs perfectly with the coconut color choice of the upper cabinets. He also compared Diamond cabinets to being “a Swiss-Army Knife of cabinetry,” meaning that it comes with many features that are preferred by homeowners, including many choices in colors and an accompaniment of a myriad of gadgets to suit just about any kitchen remodel.

One focal point for the kitchen is its eye-catching island, which provides a fantastic seating area that sets the stage to create exactly the type of social setting that the homeowners were hoping for. The island and kitchen have quartz countertops, which Omoto described as all the rage in kitchen remodels now due to their ease of maintenance, durability and attractive patterns. The final addition to the kitchen remodel of some snazzy but stylish lighting that the homeowners chose perfectly complemented the kitchen, the final product being a bonafide, dream come true kitchen remodel for these social-minded Mililanians.

To see more kitchen remodels by Homeowners Design Center, or to find out how they can help you with your kitchen remodel, click on any of the photos above or wherever you see their name.