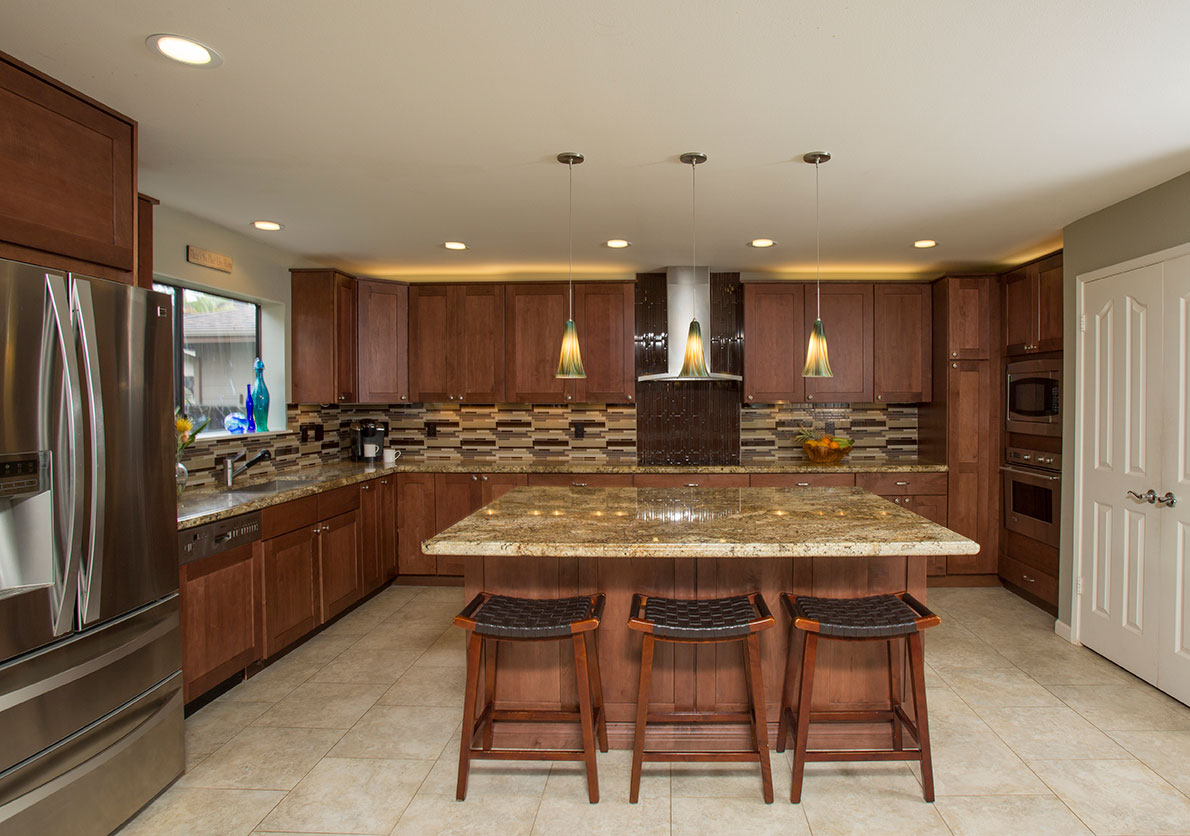 When a local tile company manager and his wife decided it was time for a kitchen remodel, he knew that the type of work he had in mind would require a kitchen remodel professional willing to not only think outside of the box, but also one who had the skills and know-how to incorporate his specific visions—and existing, pre-purchased materials—into the operation. Having shared a working rapport with lead designer Randall Omoto of Homeowners Design Center (HDC) for years, this savvy professional knew exactly who to call.

“I had known [this client] for quite awhile now, and he is an expert in the field of tile and stone,” shares Omoto. “He came to me and asked if we could help him with his kitchen design.” Simple, right? But Omoto reveals there was a twist to this particular kitchen remodel task: “He had actually purchased cabinets from a company that was closing down, and needed to know whether the cabinets would work in his kitchen.”

While most designers would hear this complex twist and run for the hills, Omoto, was absolutely confident that his team could take this pre-purchased puzzle that they’d been handed, and not only come to a solution, but seamlessly incorporate that cabinetry into one gorgeous cucina.

“I think his main goal,” chuckles Omoto, “was to make sure everything that he had bought wasn’t going to end up in the trash, and that we would actually be able to use as many pieces as he had bought towards the new kitchen remodel.” A daunting task to most, Omoto welcomed, and practically relished, the challenge, seeing it as one bonafide humdinger of a home design “puzzle”! This kitchen remodel was not going to go unchallenged.

“It was a puzzle of sorts, a challenge. And I like these types of projects, because it really makes you try, and think, and make sure that the kitchen doesn’t look like it is something that was thrown together, but rather, something that we truly designed,” Omoto says. A kitchen remodel trademark of Homeowners Design Center.

So how exactly did HDC turn this cabinetry jigsaw puzzle into a culinary delight? “The first step was to go out and measure [the space], and to determine wants and needs, etc,” Omoto says. Next, Omoto details how HDC went to the client’s actual warehouse to survey and inventory the purchased cabinetry, deciding what could feasibly be used in the remodel. Then, utilizing state-of-the-art software, Omoto tells how HDC was able to provide a 3-D rendering of how the kitchen remodel would look, incorporating the exact pieces that would be used.

And the outcome? True kitchen abracadabra, seamlessly blending together Omega Dynasty series cabinetry, stained in a rich, cherry briarwood, with trending linear tile work, stainless steel GE appliances, and natural stone countertops oozing with character and surprisingly low-maintenance aesthetic appeal. And if you’re wondering how many of those pre-purchased cabinets actually made the cut, getting “adopted” into this kitchen? “All of them!” Omoto smiles, his grin as wide as the sky.

If you're planning a kitchen remodel and want to see more blogs and project videos by Homeowners Design Center, click on any of the photos above or wherever you see their name.